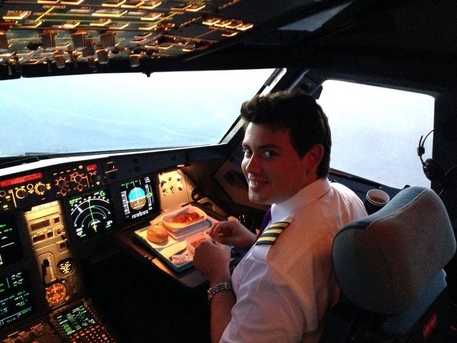 Some people achieve their dreams and ambitions as they reach middle age or beyond. James Rao was lucky to have achieved this before he turned 22 and in the process had a profound effect on his friends, his family and everyone who came into contact with him. He was fearless, smart, strong willed, focused, kind, never boastful and always considerate of others as he quietly achieved, without any fuss, his lifelong ambition to be a Commercial Airline pilot flying big commercial jets, like the A320's he had grown up around in Toulouse. He did all this at the tender age of 21 ½.

James was working at Safi Airlines, a brand new Commercial airliner in Dubai flying to all parts of the Middle East, Afghanistan, Pakistan and India. He started this position as a pilot in January 2014, after a brief five month position working for a small private aviation firm in Lausanne, Switzerland. He was ecstatic about his new job opportunity in Dubai and thrilled to be flying big planes! He took many photos from the cockpit flying over Mountain ranges in Afghanistan, Switzerland, and India etc. and loved the view of the earth from above. He worked at SAFI Air until his sudden tragic untimely passing from cancer, which he was unaware he had.

This charity, James Rao, Live your Dream Foundation has been set up by James's parents in his name to honour him and his legacy and bring positive, lifelong dreams and ambitions to reality for other children. This is what James loved to do, help people feel good and achieve their dreams.

James Kiran Rao was born on June 8th 1992 in England, just north of London. His parents Alison and Kiran both worked at British Aerospace in England at the time and he was born into a family with a love of Airplanes and Flying. Both his parents learned to fly at a young age in high school and the two had met at City University while studying Aerospace Engineering in the 1980’s.  James was very much a product of his parents and he quickly developed his passion for flying, planes and travel.

When he was just under two years old, his parents moved to France as his father started his job at Airbus in Toulouse. Travel was always in young James's blood and before he turned 3 the family had moved to Washington DC, USA.  He spent some wonderful formative years in DC and a few years later the family moved to Delhi, India.

This is where James developed his passion for India and loved every minute of his life in this vibrant country. India and its chaotic energy and fast pace of growth appealed to young James and he felt completely at home in New Delhi. He embraced India wholeheartedly, loved the culture, the food and the people, after all, he was ¼ Indian himself.  His grandfather was originally from Bangalore, India.  His life was full of adventurous experiences and he was mature beyond his years, a born leader and focused, kind hearted, caring, and happy but always a realistic person who became stronger as he progressed through his life.

When the family moved back to France James was around 8 years old and was a Platinum Frequent Flyer member with his own card where he racked up many frequent flyer points. He loved this!

In Levignac, the family set up home and young James, his younger brother Matt and sister Emma all attended local French schools and then started at the International School in Toulouse.

James embraced France and its culture as he loved meeting new people and having new experiences, and Toulouse with its multicultural families who work at Airbus was wonderful. He made lifelong friends and thrived at his school. He loved learning and experiencing new things and was always up for a new challenge. It was in Toulouse that he learned to fly a small plane and decided before he was 15 that he wanted to be a pilot and develop a career in the airline industry like his father. He came alive around planes as he knew everything about them. He was often seen looking up at the sky and telling you what each plane was as it flew by. He also developed a passion for playing the guitar and music.

During his time at the International School of Toulouse, James with the help of his teachers organised a charity trip to Mumbai, India to work at an orphanage bringing school supplies and fun to the children there. He did this twice over two years and his school supported him whole heartedly as teachers and students came to India with him. He was hoping to do more with this charity in his lifetime. It connected him with India and he felt he could make a difference in some children’s lives.

Like his parents before him, James studied Aeronautical Engineering at City University in London. As part of his university course, he spent 18 months in Jerez, Spain learning to fly big planes, like the A320. For James there was no better feeling than flying and he had a smile on his face throughout those years!

For someone so young to have achieved so much is exemplary. James would not have seen it like that. To him it was just “Living his Dream”, something he wanted for all his friends and family and anyone who wanted to reach for the stars.

Kiran Rao's cousin Aravind in India writes about the ceremony he carried out in India to honor Jamie one year after he left us. They gave a cow and a calf to the local Hindu temple.  The significance behind this is explained in the text below.

We had been to a temple called Sonda, (also called Sodhe, Swadi, Sonde) a place in Karnataka.

Sonda is small remote place surrounded with nature and by thick forests and greenery with beauty. It is around 20 KMs from Sirsi Town of North Kanara District.

The place is the headquarters of the Sodhe Matha, one of the eight Ashta mathas established by Sri Madhvacharya, the famous Dvaita philosopher that we follow. The matha at Sodhe village was set up by Swami Sri Vadirajatirtha. The Brindavana of Swami Vadiraja Thirtha can be found at Sodhe. The main deities worshiped at the Sodhe matha are Lord Bhuvaraha and Lord Hayagriva. Sri Bhuta Raja is also worshiped there.

In our religion, it is believed that the benefits of donating a cow are simply endless. There is no other donation comparable to donation of a cow. It helps in making a person pure and helps him in attaining the highest state of eternal bliss or heaven.

Gau' means cow and Daan means donation. Cow has a great importance in Hindu religion. Since ancient times cows have been donated by kings and other people to Brahmins and others. Although it can be donated any time, but it is believed that at least one cow must be donated in one man's life time. Donating Four in one’s life time, is what is said is the best.

Cows have always played a pivotal role in the Vedic Agrarian society. The Cow is revered as the most sacred animal to Hindus, a fact that is evidenced by the edication of several hymns and rituals, reverentially addressing it as ‘GOMATHA’ (divine mother cow) in all the sacred scriptures including Vedas and Puranas. ‘Gomatha’ is a symbolic representation of 33 crore Gods who are said to hold positions in various parts of a cow’s body. As a representation of the divine, all auspicious ceremonies and rituals involve the Cow and its produce. Everything from, milk, butter, ghee, curd, cheese, even the cow’s dung and urine are considered very sacred in Hindu Vedic tradition.